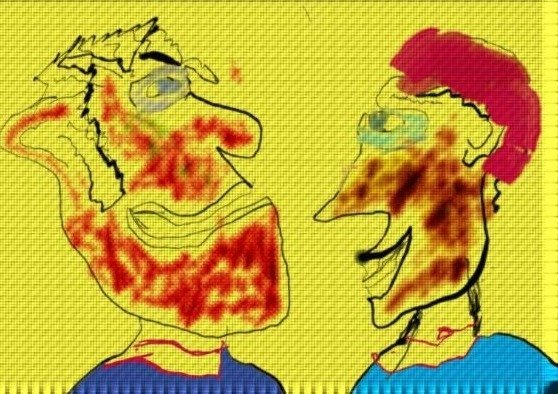 Classical music played at the Pastel Patio when George entered to find a table suitable for conversation with Josephine, his high-school sweetheart.

They had become reacquainted at a reunion after they had taken separate paths since high school. George had toured as a drummer in a rock ‘n roll band while Josephine worked as a music librarian at a local community college.

The Pastel Patio was a local art gallery/coffee shop featuring paintings, drawings and sculptures created by people who struggled with brain health issues. The gallery got its name from a courtyard patio in the center of the building.

George arrived early so he could find a table with just the right lighting next to a landscape painting. He wanted the atmosphere to be just right when Josephine arrived.

The time for her arrival seemed to come, then vanish. Half an hour later, Josephine walked through the door. She spotted George and rushed to his table.

“I’m so sorry I’m late. I had a student who pestered me with questions and I just could not get away,” Josephine said.

“That’s all right. I’ve just been sitting here admiring the artwork. They have some real quality pieces. Can I get you a latte?” George replied.

“I’ll just take some juice, thank you. So, George, I’m so glad to see you again. I’ll just have to get caught up with your life. How’ve you been? What’s your life been like since high school.? Have any kids?”

George was a bit taken aback by all the questions. He sat back in his chair before saying his life had been like a slow blues ballad.

Josephine smiled. “Oh, I know a few things about ballads. They are my specialty at the library. I especially like the 19th century murder ballads. Your life hasn’t been like that, has it?”

“Like Lizzy Borden? Heck, no. I mean blues ballads, where you lose the girl and the money. What do you mean you’re into murder ballads? Have you killed somebody?”

“No, nothing like that. It’s no different than watching crime shows on TV. That’s what they did before TV or radio,” Josephine replied.

“So you don’t think song lyrics can get you to do things, like killing or taking drugs?”

“Not at all. In fact, they are a safe place to put your feelings, all the dark ones that we all have.”

George smiled. “Well, that’s a relief. Sometimes I feet guilty after a gig with some of the songs my band plays.”

“I wouldn’t worry about it. Music is the language of the soul, with all its nooks and crannies. Sometimes the light shines in and sometimes it doesn’t. Finding a way to express it is a whole lot healthier than leaving it all locked up. If that happens, the soul can turn into a monster."