Prologue: January to the Rescue 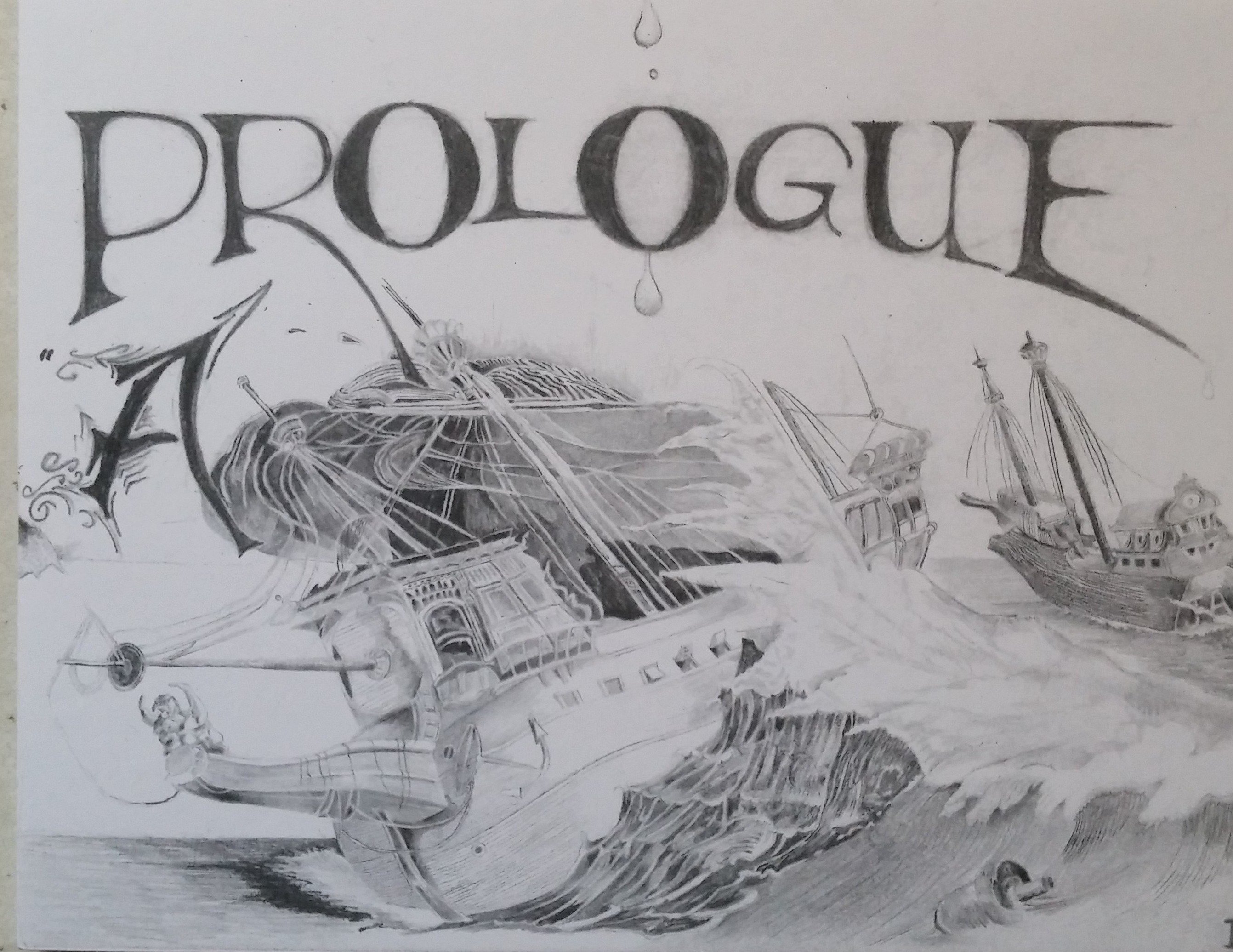 Editor’s Note: Ian Webb drew two pictures in 2017, PROLOGUE and THE DREAM, and wrote stories about them, following a class assignment based on a picture book. PROLOGUE is featured today.

Art and text by Ian Webb

The interesting thing is that other than the wordings: THE DREAM and PROLOGUE, both pages of a story book were blank, torn from a $10 mini-shot book, provided by my 7th Grade English teacher in 1993!

For the student that purchased one and made a handwritten short story (drawings if desired), they would receive extra credit. Knuckleheaded me, I did neither. But it was towards the end of the year and I passed.

Almost 25 years later, I tore the two pages out and did two unrelated drawings for each. It was the early part of the year in 2017.

I had been working on an elaborate art project for months. I was starting to get melancholy over how far I seemed to be from completing it.

I didn't give up and completed it later on. But during this time, to keep from dying of long-term art boredom, I took on some side projects as quick and playful in nature.

Prologue: January to the Rescue

Art and text by Ian Webb

It was a very dark and cold night in January of 1899.   An icy storm in the middle of the Atlantic Ocean was THE very last thing I, or anyone else, needed. I was on my way to visit my beloved wife in England, whom I had not seen in a year.

I had spent the first seven months of ‘98 building a machine, of my design, with the American government. A construct, designed to carry two people, would travel through the vast gulfs of space AND time, anywhere they wanted, in minutes.

Its only source of power was the sun. It was a wondrous machine, beautiful to look at, but by far the greater beauty was that it worked! And now, on my way home, I did not even care. All I wanted was to see my family.

For the remaining five months, well...nearly five, I was hospitalized in one of the foremost psychiatric hospitals in the country. The doctors called my case an adapted form of "La Folie Circulaire" or "Circular Insanity."

Later on, I had heard one of them say something like MANIA DEPRESSIVE HALUCINATORY. That sounded strange to me since I had never seen any visions at all.  Yes, it was very much the most successful and catastrophically hardest year of my adult life. Machine or not, the human brain is the most delicate and powerful tool that man has ever used in the known universe.

But all I wanted to do was to go home. And now this.

We were 3 ships. Mine was MARCH, the other two were JANUARY and FEBRUARY. Would all three of us make it back home? While watching my bound volumes slide back and forth along the floor, I heavily doubted it.

Believe it or not, despite the mental hell I had been through at the hospital, I was wanting very badly to be back in my assigned ward.

Would I make it back home? What would be the future of the electronic machine I built of gold and silver? Would my wife find the same man she loved from a year earlier?

My name is Ian Philips Fuller. This is my last story. END???

Editor’s Note: Ian would like for readers to add a conclusion in the comment section. How do you think the story should end?

#artwork #drawing #story
31May
The DREAM - A Dragon's Tail
Comments