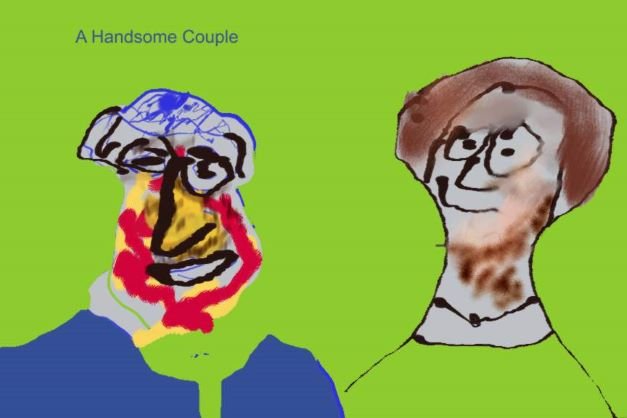 Image and text by Rick McVicar

George and Josephine are so happy being reacquainted at their 20th high school reunion.

They had been the power couple at Johnny Appleseed Senior High School. He was the homecoming king and she the queen.

They had first met at band camp. George played the drums while Josephine played the clarinet.

Together they had arranged for jam sessions in the wee morning hours at camp, sneaking away from their counselors along with a couple of horn players to spice up the night with swing. Counselors turned their heads till morning, making the couple march extra laps around a football field.

After the two graduated, they went their separate ways to different universities. George stayed with music, joining a rock band that played in bars and fraternity houses. Josephine gave up the clarinet but still followed musical pursuits, becoming a music librarian.

Shortly after college, George was wed to a singer from his band. Josephine remained single, devoting her life to lead sheets and musicians’ biographies.

George’s marriage ended up being a train wreck. His drinking did not help. After his divorce, George sought solace at the Pastel Patio, a local art gallery that specialized in soft colors and relaxing music.

“Did I see you the other day at the Pastel?” Josephine asked at their reunion.

“No, I don’t believe so,” George replied.

That was a lie. The two had been spying on each other at the gallery for the previous six months. Both had felt too shy and awkward to introduce themselves at the gallery.

Josephine had squirreled away almost every nickel and dime she had made at the music library so she could buy artwork. Her apartment was packed with paintings and a couple of sculptures.

George had watched almost every purchase. He had noticed Josephine was particularly fond of painted roses.

At the end of the reunion, George kissed Josephine good night. He then drove to the floral shop to stare at roses in the window.